Over the past two decades, state marijuana reforms have flourished. At present, more than forty states have legalized the possession and use of marijuana in at least some circumstances, as depicted in Figure 1.1 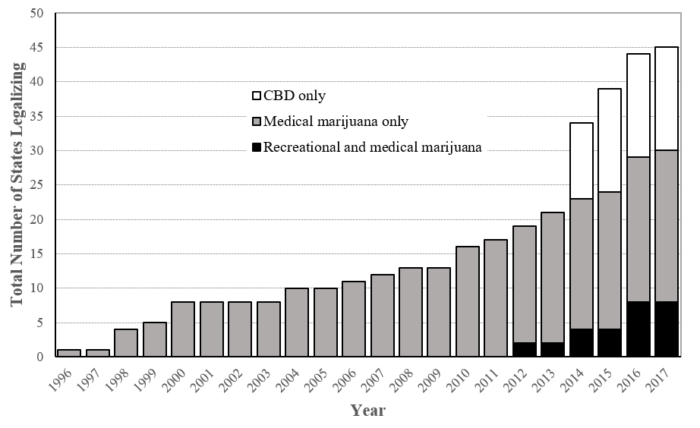 Even more boldly, nearly all of these states have authorized firms to produce and sell marijuana, seeking to supplant the black market of old with a legal, but still heavily regulated, one. Colorado, for example, has licensed more than 600 firms to produce and/or distribute marijuana, while requiring those licensees to comply with more than 150 pages of regulations.2

But, can this state-licensed marijuana industry survive the new Trump administration? Notwithstanding the passage of state reforms, federal law continues to ban outright the possession, production, and distribution of marijuana. While the Obama administration eschewed enforcing that ban against marijuana users and suppliers, as long as they complied with state regulations, there are signs the new administration might not follow suit. Most notably, President Trump’s Attorney General Jeff Sessions has made it clear that he opposes legalization of marijuana, a drug he considers “only slightly less awful” than heroin. Comments like this have led some to predict that the attorney general will launch a new “war on weed” that could decimate the state-licensed marijuana industry.3

In this short essay, however, I want to suggest that the Trump administration’s actual impact on the industry will be far less dramatic, because the administration is constrained by three potent forces.

One of these constraining forces is politics. With roughly 60% of Americans now supporting outright legalization,4 cracking down on the marijuana industry could prove costly for Republicans in the midterm congressional elections, not to mention Trump himself in the 2020 presidential election. For this reason alone, President Trump might not let his attorney general pursue aggressive legal action against the state-licensed marijuana industry. Indeed, it is telling that Donald Trump repeatedly disavowed any plans for a crackdown while on the campaign trail in 2016, insisting that it was for the states to decide how to regulate marijuana.5

The same political realities could generate resistance to any crackdown from within the Department of Justice (“DOJ”) as well. Local United States attorneys will be responsible for executing the administration’s policy, but these front-line officials may not share Sessions’ hardline views of marijuana (many Republicans do not), and some who aspire to elected office might fear alienating local constituencies. Although the attorney general can pressure these reluctant officials to fall in line, his influence over them is by no means absolute. Hence, they might be able to blunt or even thwart a legal crackdown.6

For similar reasons, Congress might put a swift halt to any crackdown. For most of the last two decades, Congress has been content to let the DOJ address the messy conflict between state and federal marijuana policy. As marijuana reforms have become more popular, however, Congress has begun to assert itself, even forbidding the DOJ from using any of its budgeted funds “to prevent [states] from implementing their own laws that authorize the use, distribution, possession, or cultivation of medical marijuana,” including by prosecuting “individuals who engaged in conduct permitted by [state medical marijuana laws] . . . .”7While Congress hasn’t yet barred the agency from prosecuting federal crimes involving recreational marijuana, an aggressive crackdown by the DOJ could provoke Congress to do just that.8

A second constraining force is resources or, more accurately, a lack thereof. The Trump administration doesn’t have the personnel needed to enforce the federal marijuana ban aggressively, especially if it wants to pursue other priorities, like combatting the opioid crisis. The Drug Enforcement Agency (“DEA”), for example, employs only about 5,000 agents and they are responsible for regulating all controlled substances, not just marijuana. While the DEA could try to “make an example” out of a handful of state-licensed marijuana suppliers, the impact would be limited. After all, there is no shortage of people who would be willing to take the place of those suppliers (especially if the crackdown is expected to be short-lived). Indeed, the lack of resources compared to potential enforcement targets is one of the main reasons why earlier crackdowns conducted during the Clinton and Bush II administrations failed to stop the spread of state marijuana reforms (as shown by Figure 1).9

To be sure, the attorney general could attempt to challenge state regulations as preempted, without over-taxing the DOJ’s limited resources. Even if such a gambit were successful (and that’s a big if),10 however, it wouldn’t necessarily serve the attorney general’s goals. After all, preemption wouldn’t restore state prohibitions on marijuana; it would only remove the regulatory restrictions that states have imposed in lieu of those prohibitions. Think marijuana is cheap and accessible in Colorado now? Just imagine how cheap and accessible it would be if marijuana suppliers no longer had to obtain state licenses, test and securely package their products, or pay hefty state taxes on sales of the drug.11 Indeed, Jeff Sessions has seemingly disavowed any preemption challenge, recognizing that the states “can pass the laws they choose.”

A third moderating influence stems from legal constraints on the administration’s ability to convince states to turn their backs on reforms. Under the Supreme Court’s anticommandeering rule, of course, the attorney general cannot simply order the states to reinstate their prohibitions on marijuana.12 But under rules governing conditional spending, he can’t even pressure them to do so, the way he’s now pressuring cities to abandon their sanctuary policies by threatening to withhold federal law-enforcement grant funding from them. That’s because no congressional statute clearly conditions the receipt of federal grants on the states helping the DOJ to enforce the federal marijuana ban. In any event, Congress would have a tough time convincing the states to abandon their reforms voluntarily, given the substantial tax revenues they now glean from the licensed marijuana industry.

In sum, while it is clear that the new attorney general opposes state marijuana reforms, it is less clear what he will or even could do to block those reforms or to curb the industry that has flourished under them. The popularity of reforms, limits on federal resources, and legal doctrines like the anticommandeering rule all limit the DOJ’s ability to shut down the state-licensed marijuana industry. While Jeff Sessions may never embrace reforms, he may choose to pursue other tactics, like anti-marijuana media campaigns, to curb the use of marijuana and the harms caused thereby. Only time will tell, of course, but if history is any guide, the state marijuana industry will survive the Trump administration intact.

* Professor of law, Vanderbilt University Law School. I want to thank Aaron Rothbaum for his helpful research assistance on this essay.